I have just finished watching the last episode of MI-5 (Spooks') Season 9 and I'm a bit ticked. (Please take care for the Spoilers that follow and - don't read if you haven't watched through Season 9). 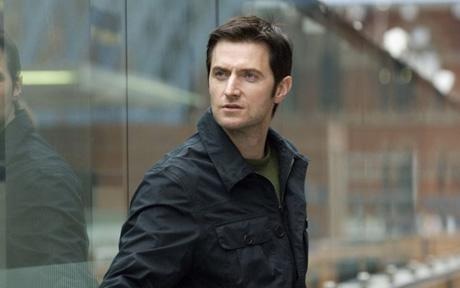 I have no problem admitting that I'm often in over my head with some of the sophisticated and complex Spooks plots. Whenever one doesn't make sense, I always assume its me that can't figure it out and I really don't let it bother me. I have a rather healthy suspension of disbelief. But this time its not about me. This episode has huge plot-holes in it that are not my fault and due to nothing more complex than stretching a storyline too far.

Lucas North's (oh excuse me, John Bateman's) motivations and actions in this episode just don't and can't add up. While Vaughn was alive and blackmailing him, things made sense. The character-formerly-known-as-Lucas was walking a tightrope trying to keep things together --wishing to protect his job and reputation and trying to carve out a life with Maya. This is all fine. But after the threat of blackmail is gone (with the death of Vaughn) and after Harry knows (most of) the real story and Lucas knows his job and reputation are shot, his main motivation hinges on simply escaping somewhere with Maya.

Why in hell wouldn't Lucas have cut a deal with his own country rather than work with the Chinese to whom he has no particular allegiance and who are not providing him anything that others in power couldn't also provide? The Chinese entanglement was Vaughn's deal, not Lucas'; he is too smart to just keep working with them by default. Especially when all the spooks are offering to deal.  It doesn't make sense. 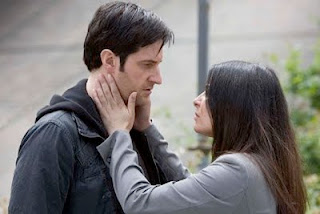 Once his last motivating factor, Maya, is dead, things become even more strange and strained. There is no reason why Lucas would become distraught to know that Albany wasn't a real threat. He was not invested in Albany and didn't even know what it was for much of the episode. His "mission" wasn't to deliver Albany to the Chinese. His mission was to get out of town. He could have been giving them chocolate. He didn't care. Why should he jump off a building when Albany turns out to be useless? It doesn't ring true.

Somebody defending the episode might say, well, he acted unpredictably because his mind was screwed up; he was confused; he wasn't acting out of rational motivations. Fair enough. But, while I think it makes sense for Lucas' options and strategy and even his state of mind to be messed up, there's no reason for his basic driving purpose as a character to be messed up.

And there is no reason for the writers to have changed everything about him that a viewer had the right to rely on. One of the best things about this show has always been its internal consistency with respect to character development. Rugs just don't go getting pulled out from under us. Here they are flying through the air.

...And, if he was so messed up, it just points to another plot flaw: there is no way, in that state of mind, he could have orchestrated (solo) all the sophisticated maneuvers he had going to get Albany from the spooks (the car pre-programmed with directions, the phone that calls only him, the suit of clothes for Harry to switch to, the scanner set-up, the IV drip for Ruth, and on and on). Its too much.

I'm not going to say that Season 9, Episode 8 isn't good TV. Its exciting and heart-thumping and heart-breaking and interesting. But it doesn't feel true to me. It has a flavor of Bobby Ewing showing up in the shower in Dallas rather than being dead. Yes, writers of fiction have wide license. If they want to all of a sudden make someone really alive after all!  they can do it. If they all of a sudden want to make someone really really bad after all!, then they can do that too. But there is no reason to have made Lucas so super duper ultra bad that he was willing to sell out his country for basically no reason... so really ultra bad that he was willing to kill a random stranger, let alone an attempt on a co-worker whom he cared about, trusted and respected. Not when he'd just spent years working his ass off as an agent dedicating his life to protecting his country and countrymen.

And I say all this as someone who is actually quite OK with some level -- a fair level -- of badness in Lucas. It makes sense. He is ambiguous. He has a strange flatness about him into which you can read a variety of things. So I don't mind the writers constructing a past for Lucas that torments him and causes him to become unstable. Its an interesting choice that enlivened this whole series, but by the last episode it was clear to me that they were straining to make it all work. They took a good idea to the wrong place and went too far.

By way of comparison, I enjoyed the way the departure of Tom was handled many many seasons ago . . . it was ever so slightly similar.  Devoted and caring agent just has one little bit more than he can take  and becomes rogue and unstable. There was a great ambiguous ending for him. I'm OK with rogue agents going a bit over the brink or being scarred by a difficult life. I mean, you don't generally go into this line of work if you are and have always been boring and squeaky clean.

The only thing that made the last episode of season 9 bearable was the phenomenal acting from Richard Armitage who almost managed to sell this ridiculous storyline. He reached deep and found a humanity for Lucas, despite these crazy plot twists. His scenes with Ruth, Harry and Maya are all powerful and touching. It was rich when he was advising Ruth to marry Harry. He has an incredible capacity to tap into Lucas' vulnerability.

I'm going to miss Lucas. And I don't see why they needed to blast him to bits before they ousted him. Even Connie got to redeem herself by disarming a nuclear bomb and saving millions of people before she was blasted away.

Spooks has always wooed me willingly along to wherever it wanted to go. And I've always been thrilled by the ride. But I feel jerked around by this ending to the Lucas story.

It might have been better if  Pamela Ewing had just dreamed it all, really.

"MI-5's Lusas North, the Character that Pamela Ewing Dreamed." LostinBritishTV
Posted by Amy at 9:06 AM

Welcome to Lost In British TV -- smart writing about great drama. Though I am not an expert in film, history or costume :) I am a connoisseur of humanity who believes that good human drama engages us all.
Writing about whatever aspects of life are fresh in my thoughts, as well as whatever I am currently watching, which is sometimes not TV . . . or British . . . I wish to amuse you.
If you've found yourself here, please take a look around -- and if you'd like to leave any respectful comments, I'd love to hear from you.